You are here: Home

A word from Fr. Kevin…

I am writing this article in Malta.  Ann and I are here on part of our annual holidays, which we take in winter.  We are staying in a hotel in the St. Paul’s Bay area of the island, with the other elderly retired guests who take advantage of the excellent deals for winter breaks.  Despite the walking sticks and walking-frames, these people know how to live adventurously, if not dangerously: they get out and about with remarkable tenacity each day, after consuming a full and lethal English breakfast. 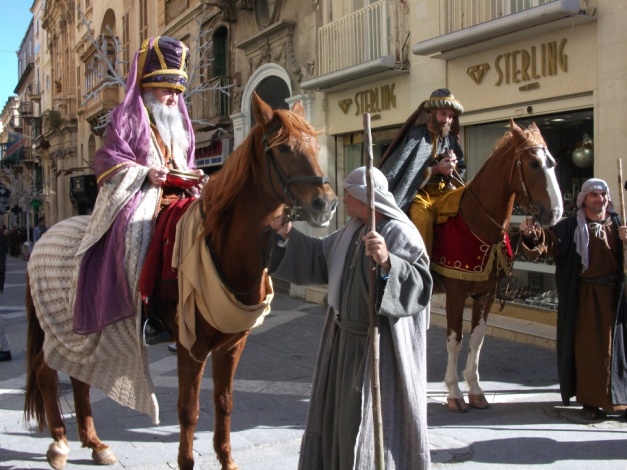 The feast of the Epiphany saw us in Vallettta, and there, situated on the main street, were three kings on horses: superbly dressed and carrying their gifts of gold, incense and myrrh for Jesus.  They then processed around the city and the sight fascinated the crowd of tourists and Maltese that had gathered.  Malta also has no less than 14 Catholic churches where Mass is celebrated in English each Sunday.

The spectacle also demonstrated the point that Malta is a Christian country.  Like Poland and unlike England, Malta had to really struggle to protect and defend its Christian inheritance, and it remains proud of that achievement.  This island nation, smaller than the Isle of Wight, has no reservations about proclaiming its Christian loyalty, and yet pragmatically has achieved good relations with its neighbouring Muslim countries in the past, particularly Libya.

However, the sight of the three kings had expressive depth.  Careful examination of their dress reveals that they were attired in the oriental dress of the Turk, from lands that are now under Muslim influence.  The demonstration was witnessing a hope: a hope that all from that religious influence would come to discover and respect the Christ-child.

Humanly speaking, I suppose that the Maltese are no different from anybody else in the rest of Europe.  What distinguishes them is that they have something special.  That quality is that they spiritually know what is needful for their eternal salvation, and they are not ashamed to proclaim it